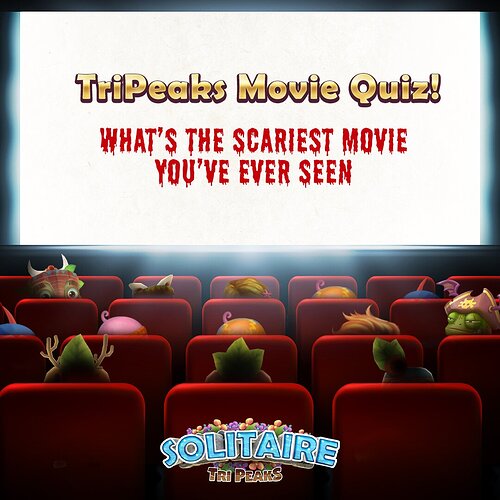 20211014_moviequiz1080×1080 156 KB
‘Tis the season! We’ve all seen scary movies. We might not like them, but at some point there was that one film that kept you up at night. Might’ve even been a documentary! Or in some cases a rom com. Or, if you’re a movie producer yourself, it could’ve been that expensive bomb people are still blaming you for.

Tell us your scariest movie for a chance at 113,000 Coins, 13 Freeplays, 3 Wilds, and 3 Volcanos! Answer below with your scariest film! We’ll pick TEN players at random next Thursday and reward them then. Good luck!

Nightmare on Elm street!!! Had nightmares every night. They always seemed so real. Until I beat him up in one of my dreams and that was it.

Friday the 13th! I actually stood up & started screaming in the movie theater for the people to run!

Carrie was the scariest movie I have ever seem, with Sissy Spacek

The Exorcist the first one from 1973

Amityhorror movie it was so scary

The original Exorcist. We kept looking under the car when we left the theater!!!

Halloween! I am not a fan of scary movies!!

The last house on the left.
Scariest movie ever. Btw love love this game

Exorcist the first one gave me nightmares

Saw was one of the scariest to me, that real life scenario scary movies are what nightmares are made of!!

The first time I saw Blair Witch Project, I couldn’t go down to the basement to do laundry at night!

THE THING! Both films called The Thing equally scared me to death. First the black and white version with James Arnez scared me as a child. Then the color version as an adult scared me even more than the first time I saw it when I was just a child.

When a Stranger Calls. The 1979 version not the 2006 remake. Between the “Have you checked on the children” line to the ending in the bedroom it gets me every time!

The 1993 movie ‘When a Stranger Calls Back’ is good also.