tripeaks i have a question

i have a question why isn’t the medallion falling in the wild spot. you stated that algorithm controlled the crappot. if this was and is the case everyone would win wilds the majority of the time they played. we are not stupid. one day the only people who will be playing this game will be gsn…the medallion now frequents the 500 slot how is that algorithm? huh?

Hi! As much feedback as possible in regards to the new shrine should be sent through the feedback options, while you are on the game, click your profile picture and than click the help button, click contact us and follow the steps from there, I appreciate the changes they made but I was hoping they would keep the booster slots also!

thanks i will do that

The obvious answer is the algorithm is designed to NOT fall into the 2 medallion spots, but into the coin slots.

Congratulate 5 winners, collect your your 500 or 2k coins and move on.

you can keep your attitude to yourself. i know the game is rigged and i have the right to post my observations and i recommend that you not suggest that i move on because i was never stuck

i also have more than enough chest to be stuck 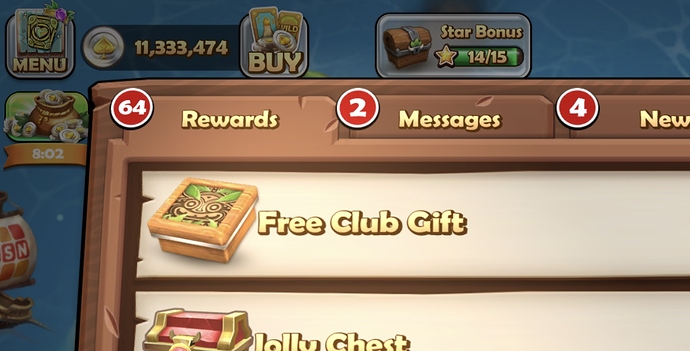 the game NOW SUCK like i said i can post my concerns when i want instead of being part of the solution you choose to be part of the problem. i’m am one of the many top scoring players weekly score range from 60-160k. i reach the score in pic in 30 mins so dear i’m far from needing to move on to anything i do exactly what i want so next time you see my post scroll on. tripeaks is greedy 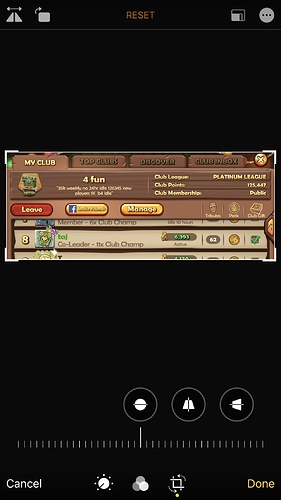 GO FLIP SOME CARDS AND KEEP YOUR NEGATIVITY OFF OF PEOPLES POST!!

You forgot about all the glitches and the lag when flipping a card. Ever since I updated I noticed that lag. Don’t know if you have it too. A lot of other people have been mentioning it. It sux when you are going for a streak and trying to beat the timer.
I haven’t noticed anything good about this update.

And don’t get me started on that crappy shrine. I use to play it all the time and loved it. Now I’m lucky to get a wild card, even though before it use to land in those spots all the time. And I hardly get any boosters now.

Tri-Peaks IS greedy. It stinks what they’ve done to a once awesome game. 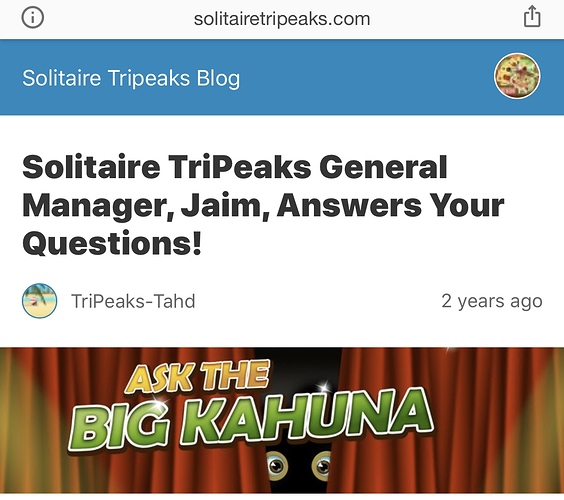 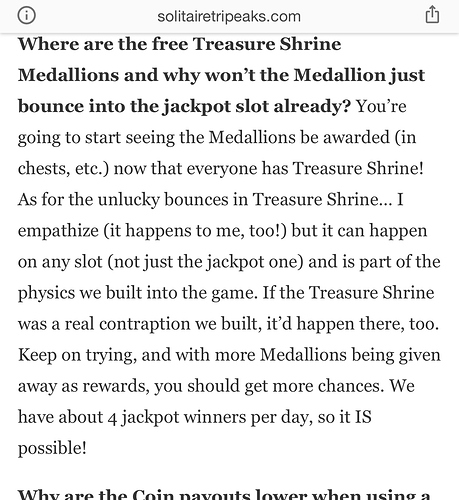 he said it with his own mouth that the medallion fell into the medallion slot because of physics built into the game. so now that the shrine jackpot has changed why would tripeaks change physics of the game so that medallion falls into 500 slot now that wild cards have replaced the medallion slot. i read that post years ago and this is the reason why i posted the question. anyone can go read the link below

Aloha, everyone! I’m excited! I’ve been wanting to do this for a while now and grateful for the chance to share whatever I can with all of you. Before we dive into the questions, I j…

Uh, I believe I’m the one with the positive posts. Your initial and subsequent posts are the negative ones. I was trying to give you a constructive perspective, to not get caught up in what things were but to adapt to how things are cause things are going to get worse going forward because it’s clear someone with an economics/finance background has been brought into the fold and no more freebies.

Lastly, it’s these type of super accounts that the game is trying to kill with the new additions.

why would a game want to kill a so called super account? no correction they are greedy they couldn’t kill my account because i can buy what i need to keep going if i choose to. however why would a game make it impossible to win which forces in app purchases? when i post i speak for the masses has nothing to do with social or economics when i post. it deals with ethics values and appreciation to the players that choose to pay as an option and not by force

@Chatejah_George, you might think you speak for the masses, but you really can only speak for yourself, unless you have have been appointed or elected. I know there are a lot of people on here here who voice their opinion, because they they think TriPeaks reads hundreds of thousands of posts everyday (here, and on FB), but I honestly don’t think they do. They have a system set up for those who want be heard, and I’m sure they expect people to use it. The only way to really let TriPeaks know that something doesn’t work for you, is to submit a trouble ticket. I send them my opinions often. Yes, I usually get a canned response, but I hope my opinion is still added to the colleciton, and I keep sending them.

@Ff2017, I love your posts, because like you, I try to look at the positive rather than the negative. I’ve been around a while and have seen many changes, and still LOVE this GAME. However, I don’t think don’t think the game is trying to kill super accounts. I think they are just trying to be a profitable business and pay their employee’s. The pendulum may have swung a little too far right now, but I think they’ll see that some of their changes wasn’t the best business decision, and make that right.

Everyone, just hang tight - and please try to have have fun playing!

Yep. No doubt about it. It is so obvious.

What I mean by killing super accounts is that there is a segment of the population that is doing extremely well and perhaps arent paying real money, so they may be analyzing these accounts and seeing how they are doing it and if there’s a repeatable games they are playing or a repeatable strategy that they think is broken (meaning expected value greater than cost leading to eventual unlimited gains) they are going to change it.

The fact that it was like this for years clearly means no one with applied math, finance or econ background was on the team.

So of course you as a player being used to such “freebies” think they are ruining the game. But to them they are fixing the game and once again I’ve see stuff like this happen to games I played in the past.

fyi…the coins and boosters that i have are not from freebies they are from my banking account the freebies payouts are low so i definitely don’t count on them the game has turned to pay to play and the masses agree!!!

if tripeaks don’t read post i see there’s no scavenger hunts to win chests. enough players complained and stop playing it. the scavenger hunt is a waste of time coins and money

because you use the word think in your comments i know not to pay attention to what you say tripeaks is greedy they make a profit there’s too many games that don’t change programs to suck money from players ! i see you always trying to contradict every time someone post or don’t feel the way you do. your comments are notorious. if tripeaks do t read our post why do you make it a point to post on everyone’s post as if you can change someone’s opinion. the masses feel just like me they are greedy. they reprogram games to suck your surplus to try to get us to buy buy buy