Hi Guys,
Since playing Treepeaks, I’ve been using the Treasure Shrine to collect coins. Before changing the configuration of the shrine, I could use the coins to win boosters, for example when I needed them. I took the opportunity to congratulate the winners. Many of you certainly do that too. Unfortunately, I have noticed in the past few days that it takes more and more hours until there is a new winner. For me it is a very clear sign that players are ignoring the shrine more and more because it is no longer worth investing in. I can understand that very well.
my question: did you notice that already?

I too am not a fan of the new shrine, but I still bank my medallions, and drop them when I have more than 10. I have never paid to play. I have not noticed any Congratulations changes. Sometimes I hit it right and can Congratulate 3 in 1 hour, than 5 hours to wait again. Depending on when I am logging on to play.

That would have been normal so far. But that’s my observation. We’ll see how it develops …

The last winner was 17 hours ago. That is a record. I had to wait a long time before that too.
This has never been the case!

Yup, I was thinking the same thing. There would always be that red exclamation point whenever I’d log in. Now? Not so much.
On the FB page seems like someone’s always saying how awful it is now. Haven’t seen one person say they like it. I don’t know what’s worse: that they changed it and it’s awful, or that they are so silent. Don’t hear one peep from them.

20 hours now, I am hoping there will be alot of winners soon! I think the longest I seen it was 14 hours

I saw one recently that was over a day. It is either that people aren’t playing or they are playing but less people are winning the 1 million. Neither is a good sign. I’m not a fan of the new layout. It uses to be I constantly got another token, which was sometimes annoying cuz I wanted to play. Since it’s changed, I have yet to win a wild card.

I’ve never seen it go a day until now.
And I use to be able to get wild cards from there but now I have to get them through the islands that offer them since I can’t get them from the shrine anymore. 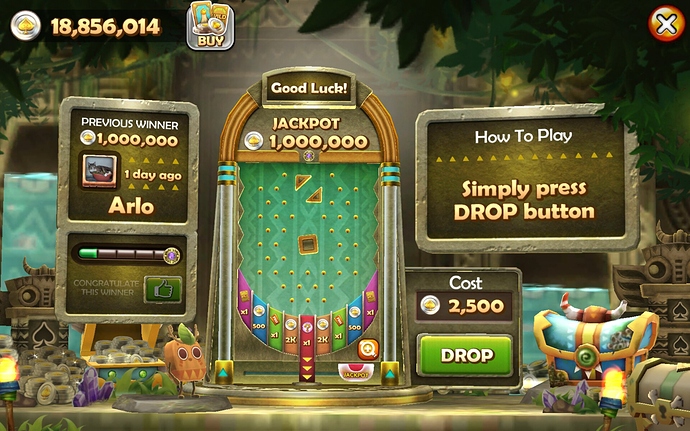 Yep that is exactly what I am seeing…I don’t even play the shrine anymore, I lose all the time

I Think players are dropping less and saving them up in hopes they will change it back.
I’m not a fan I dropped 25 the other day got mostly FP which was ok but NO boosters and only 1wild…
They were all ones I saved from congrats -I dropped them just to see how long it takes to build them back up…because as you said the winners seem to be few and far between. On average in a week I could build 30… so I’m guessing at this rate it will take a month to build that many☹️… but I guess there free.

At least you got a wild. I spent 30k and got 3 free plays. That’s it. I tried building them up through congrats but wow, it takes so long. Use to play everyday and miss it. But I keep checking to see if they change it back. I think everyone is hoping the same, like you said.

i am new where is the shrine

I’ve never seen that many !

I only play when I have medallions. I can’t justify paying 2,500 coins to win 500 coins…that is insane. If they are going cheap then their cost should also reflect that…500 coins

In the free coins. Bottom right of the screen.

Yes, I have noticed and I agree with your assessment. It was SO disappointing that they have changed the payoffs on the Treasure Shrine so drastically It simply isn’t worth trying any more. I only go there to congratulate winners or play any medallion I get as a prize. I won’t spend coins on medallions any more. It’s bad enough that they have put in the ridiculously low “500 coin” pay slots and have set it up so four of the nine possible outcomes are worth less than the cost of playing. Worse, I have noticed that since the switch, my medallions do not fall in the same slots as often as before. It used to be that about half the time, I would wind up in those outer “medallion” slots. I hit the booster slots fairly regularly and the wild card center slot a good amount of the time (but never for the million coins

Now? I most often hit the 500 coin spots and have not hit the wild cards in the outer slots at all— well, maybe once or twice, but so seldom I can’t recall the last time it happened. PLEASE STOP TRYING TO FORCE US TO SPEND ACTUAL MONEY TO BUY IN_GAME STUFF. This is just reducing my enjoyment and turning players off.

I was just making a similar observation. Those outer lanes used to be the ones I hit most often, which resulted in a do-over. time consuming, but I didn’t mind. Now? I can’t hit one and gain a wild card to save my life. Something is going on, beyond the changing of the slots. It’s a shame.

I don’t play the shrine anymore

I had 20 tokens for the shrine so thought I’d cash them in and try and get some boosters I got one booster out of it the rest went on 2000 or 500 try not to go to the shrine waste off coins I could usually spend between 50/60 thousand coins every other day dont bother now it’s a complete waste put it back to how it used to be I wont even do the scavenger hunt cause that’s just a waste of coins for wot you get in return.

I just quit playing the game entirely. It just isn’t fun. The games are too difficult to even win anymore. So good by tripeaks, I have been playing for at least a year and a half. You guys ruined this game