hello tripeaks
I have a question, is it possible to delete my account?
and create a new account in the game?
how to do ?
thank you

I had seen someone posted that in the new update delete game option popped up, if you don’t have that option while you are on the game click your profile picture, than click help, and submit a ticket about deleting your game, it should be done by those steps because they need your game ID

I don’t know how old you other account is, but new accounts [effective about 2 years ago] I believe, will get LESS coins in the Friend Center.

@Colibri is right. I have a 2nd account, and it’s terrible with friend exchange, also the ads that pop up after almost every game, the the ad banner drives me Bananas. Honestly if that were my only account I don’t think I would stick around, I just use that one to help our team with the tribute trapper whenever needed. 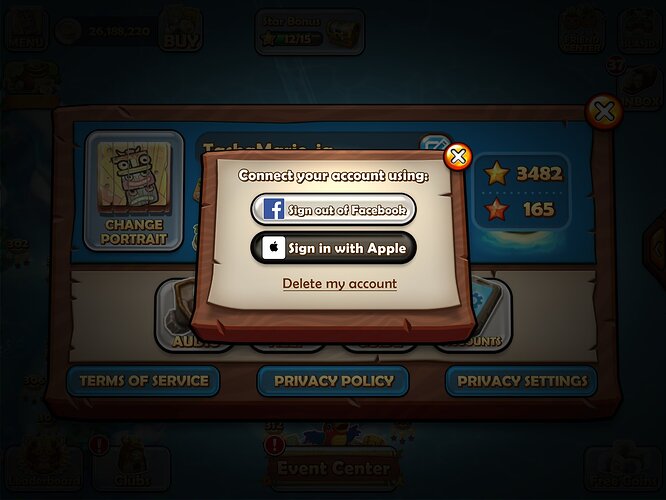 I have read somewhere tho in exchange for less coins in the friend center they get better coin return from games …I don’t know how true that is as both my accts are old so I can not do the comparison.

Do u play your 2acct on the same device?

Yes I do, so it’s easy to switch accounts, as for payouts I’m not sure because my 2nd account I am not advancing past aloha harbor

@Tracy I have an old account but am getting ads after wins [used to be every game] and banner as well. Thankfully the pop-up ads do go away,

Hmm ok. My oldest account is 5 years… I think? It’s been a long while. This 2nd account I created less than 1 year ago.

New accounts definitely get less in the friend center. I sent in a ticket about it because they use to tell people they were part of a test group and that was why they were getting less at a time or had to go more than 4 hours between asks. I told them to please remove me from the test group since I didn’t ask to be in it nor did I agree to it. Their response was that they were no longer testing - new accounts only get 1k from up to 5 friends every 4 hours because there are more opportunities for new accounts to earn coins than there are for older accounts.

So (being the nerd I am) I checked it out and I average more coins per level (same levels played on each account multiple times) on the newer account than on the old. Max payouts using the streak doubler and not touching the deck are less on the old account than on the new one by over 1,000 coins on average. However, I can always get much closer to clearing the board on my old account… usually down to 3 or fewer cards whereas on my new account, im typically left with over half the cards on the field.

The mini tikis are easier to win on the new account than on the old. The perk chests contain more coins, more useful boosters (not just freds doublers and more time), and around 5 wild cards a week. I went three weeks IN A ROW on my old account were I did not get a even a single Wild card from the earned perks.

All that being said, if I were forced to choose, I’d stay with my older account because somehow, my banked coins are on a slow increase on my old account and a steady decline on the new.

Thank you for sharing this

I recently had a problem with Facebook, and lost the account I had been playing for many years. I started a new one, and am currently getting only 1000 coins per friend.

Is there an account age or level obtained threshold for getting more in the Friend Center?